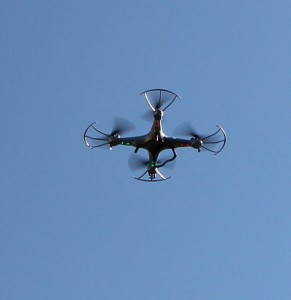 How cool. For father's day, my wife gave me a drone as a gift with a camera attached, and I quickly had it flying and well above my house. It didn't take long after it was airborne that it was stuck in a tree. That required taking out the chainsaw and cutting the tree down. Not something I had in mind to do that day as I took it out of the box.

Before actually flying it, I had no idea how much real risk is involved. Right out of the box, they're not that easy to fly, or at least the drone my wife gave me anyway. At a Father's Day cost of about $200, it wasn't a top-line model by any stretch, more of a toy really. Having a toy status doesn't lower the risk of injury, it might actually increase liability and risk because many of the lower-end drones are less forgiving for new pilots.

The only upside to cutting the tree was the fact I already planned on thinning the trees in that area already, otherwise, I would have had to climb (or send a son up the tree) to get the drone back.

Americans seem to love drones. Increasingly, more Americans are swiping their plastic to get another piece of plastic that will fly. Drone sales aren't simply commercial or consumer based, as witnessed by industry numbers,  drones for a variety of both commercial and personal uses are being bought in increasing numbers.

As drone sales explode, it's obvious we're about to see litigation over drone use. For many drone liability insurance will become increasingly important and become a vital part of their risk mitigation efforts. Because of concerns for possible bodily injury and property damage, anyone who operates a drone needs insurance coverage, or face personal financial exposure for resulting injuries.

Get a Quote For Drone Insurance Now 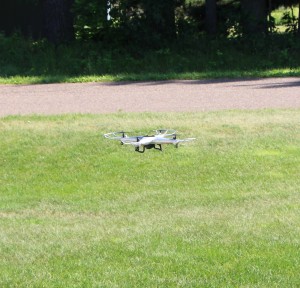 This is one of the first take-offs in the front yard with my new drone.

Make no mistake about it, drones are much more dangerous than most people fully appreciate. I predict they will become safer as time moves on due to safety systems becoming standard features, including in-flight avoidance and automatic landing upon errors (think pilot errors first).

GPS systems allow drones to hover in-place and features vary, but if you're going to get a drone, even just for fun, think about getting one that will provide a great deal of pilot error forgiveness.

Even some of the lower-end drones, for example the DJI Phantom 4 (a popular consumer drone) can travel over  20 meters per second (bursting short distance sports mode), or an effective 45 miles per hour. At $1700 on Amazon, it's probably well beyond your budget "just to try it out".

Drone aviation is taking flight and the insurance industry is taking notice.  Insurance is working it's way through the regulatory maze in an attempt to have first mover advantage.

Some industry gurus are predicting up to 600,000 commercial drone operators will be operating within the next decade. In total, 2.5 million drones (including private consumer level aircraft) are predicted to be sold in 2016.

FAA regulation FAR Part 107, has been in developing for stake holders for over a year now, and is due this year, as early as this (2016) summer.

Keep in mind that most commercial and personal insurance policies unsurprisingly exclude drones and other unmanned aerial vehicles (UAV) or unmanned aircraft systems (UAS). Drone insurance can cover bodily injury and property damage losses in which the owner of a drone can be held legally liable.

Intuitively, it may not appears drones have much potential for liability, but after a closer examination, it's (painfully) obvious that drones can easily cause motor vehicle accidents and more, including the next video, which was captured from a passenger in a commercial flight.

Needless to say, the thought of a drone hitting some of the controls or vital parts including the pitot tube (used to measure the airspeed) isn't a welcomed image. Commercial aircraft are designed to take a lot of abuse, but that doesn't mean it's a stress free event.

But what happens when a drone decides to go into traffic and potentially busy traffic where people may not expect one crashing into their car window. Will it go through the windshield? Probably not, but what happens if the driver attempts to avoid the drone and crashes into another car?

Get a Quote For Drone Insurance Now

By now, you're starting to realize just how much exposure even a small drone can have. For larger drones, even small events including crashing on top of a car and denting the vehicle can cause an insurance claim, if that is the operator has insurance.