PLEASE UPDATE YOUR BROWSER
Home > Car Insurance > Is Pothole Damage to Your Car Covered by Collision or Comprehensive Auto Insurance?

Today I was asked the question "is damage to my truck from a pothole covered under my insurance policy." The person asking had full coverage, so the answer was relatively easy and I replied "yes," albeit I wasn't sure if it was covered under the client's comprehensive or collision coverage. The answer I received kinda surprised me. Hitting a pothole with your vehicle may seem like something that can happen from nowhere and without an ability to avoid given the right set of fact, albeit not only was damage to the client's truck not covered under the insurance comprehensive (physical damage) portion, and thus a collision claim, it's considered an "at-fault" accident.

In other words, while damage to your vehicle from potholes may be covered under your insurance policy, you may need to have what's known as collision coverage to make a claim. And, if you make a claim, the carrier is likely to list the claim as an at-fault accident.

Also, it's important to note that there's a significant difference between an at-fault and a not at-fault accident as you likely find intuitive. Your insurance carrier is likely to classify damage to your car or truck as an "at-fault" accident, and that's not so good for the driver making the claim. At least not relatively speaking compared to a comprehensive auto insurance claim. At fault is much different than the other typical coverage known as "comprehensive" or "other than collision" normally found on vehicles with physical damage insurance coverage.

By now you've likely figured out that "at-fault" accidents by and large will drive up your auto insurance premium much faster than not at-fault accident claims. Typical not at-fault auto claims include theft, animal strikes (deer, bears, lions, and tigers oh my). Keep in mind that road debris is not the same as a pothole, and while either one may be just as easy or hard to avoid, road debris may or may not be covered under your insurance comprehensive coverage, and regardless, you may have a much more (relatively speaking) likely ability to seek a remedy from the party that caused the road debris to remain in the road as a hazard. If you're thinking "what's the odds of knowing where some random road debris came from," I understand. However, I do have a client that ran over a large piece of firewood and also knew that his neighbor burned firewood. He was able to figure out the wood fell off the neighbor's trailer and that the wood caused an accident (lucky, and I mean really luck, no one was seriously hurt). 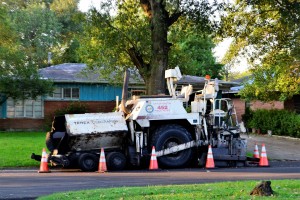 Another, more common occurrence of read debris comes from construction road work.  In the situation where there's road work and the road crew allows property, tools, equipment, waste, and other "stuff" in the lane of traffic, and you damage your car from said "stuff", you may have a cause of action against the road crew company. The status of if the crew works for the county, state, or private company can greatly influence your ability to collect from negligence, so you'll want to consult with an insurance agent or attorney in your state to learn more if striking debris on the road applies to you.