As a commercial/business (think key-man) life insurance salesperson, I'm always surprised to learn the many ways people "check out".

For example, did you know that having a swimming pool at your home is more dangerous than having a gun? Taking a shower is risky business during thunderstorms, and according to the CDC, it's not just showers. Washing clothes and plumbing in general turns into a deadly mix for about 20 people every year. About 350 in the US get struck by lightning each year, and approximatly 10% of those struck, die.

Our Friends at the CDC created this map of the US to show the most distincitive causes of death by state. It's interesting to say the least. 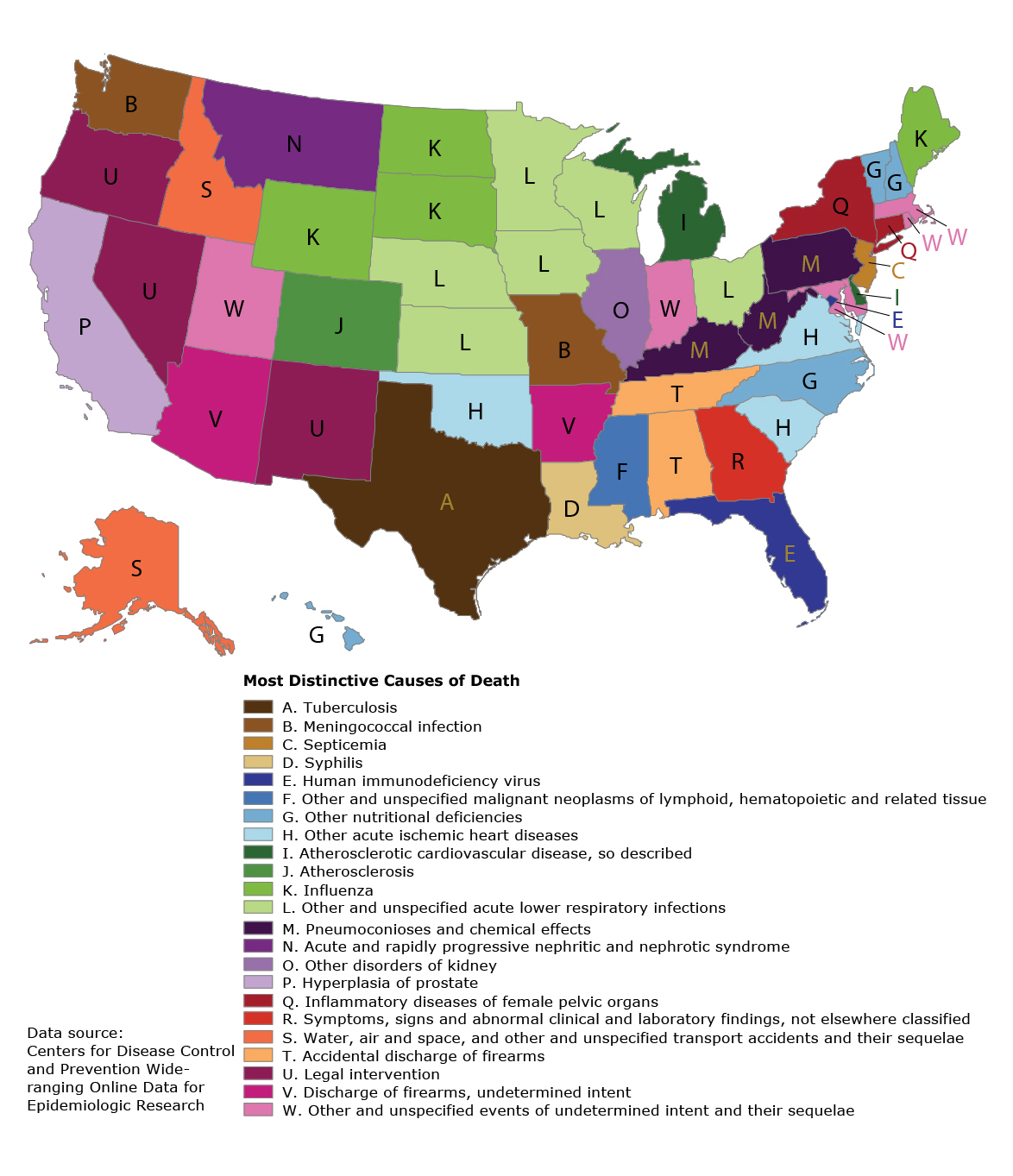 Maps of the most distinctive or characteristic value of some variable at the state or country level became popular on social media in 2014. Among the most widely shared examples have been maps of state-level birth name preferences, music-listening preferences, and mortality from among the top 10 causes of death (1). This form of data presentation has a long history in economic geography, where the mapped values are known as location quotients (2). We use the International Classification of Diseases, 10th Revision (ICD-10), List of 113 Selected Causes of Death file published by the National Center for Health Statistics (3) to present a more nuanced view of mortality variation within the United States than what can be seen by using only the 10 most common causes of death.

Counts for each cause of death included on the ICD-10 List of 113 Selected Causes of Death along with population sizes were obtained for each of the 50 states and the District of Columbia for 2001 through 2010 from the Underlying Cause of Death file accessible through the Centers for Disease Control and Prevention (CDC) WONDER (Wide-ranging Online Data for Epidemiologic Research) website (4). We also included subcauses of death contained in this file, such as specific types of cancer, which brought the total number of causes of death to 136. The standardized mortality rate ratio (ie, the ratio of the age-adjusted state-specific death rate for each cause of death relative to the national age-adjusted death rate for each cause of death, equivalent to a location quotient) was then calculated, and the maximum ratio for each state was mapped. That is, we mapped

The map was produced in SAS software version 9.3 (SAS Institute, Inc) by using a single program that imported the output from CDC WONDER, calculated the mortality rate ratios, and generated the map using PROC MAPIMPORT and PROC GMAP. The program code is available from the authors. Minor cosmetic enhancements were made to the map using Adobe Illustrator (Adobe, Inc). Both colors and numeric labels were used on the map to facilitate black-and-white printing.

The resulting map depicts a variety of distinctive causes of death based on a wide range of number of deaths, from 15,000 deaths from HIV in Florida to 679 deaths from tuberculosis in Texas to 22 deaths from syphilis in Louisiana.

The largest number of deaths mapped were the 37,292 deaths in Michigan from “atherosclerotic cardiovascular disease, so described”; the fewest, the 11 deaths in Montana from “acute and rapidly progressive nephritic and nephrotic syndrome.” The state-specific percentage of total deaths mapped ranged from 1.8% (Delaware; atherosclerotic cardiovascular disease, so described) to 0.0005% (Illinois, other disorders of kidney).

Some of the findings make intuitive sense (influenza in some northern states, pneumoconioses in coal-mining states, air and water accidents in Alaska and Idaho), while the explanations for others are less immediately apparent (septicemia in New Jersey, deaths by legal intervention in 3 Western states). The highly variable use of codes beginning with “other” between states is also apparent.

For example, Oklahoma accounted for 24% of the deaths attributable to “other acute ischemic heart diseases” in the country despite having only slightly more than 1% of the population, resulting in a standardized mortality rate ratio of 19.4 for this cause of death, the highest on the map. The highest standardized mortality rate ratio after Oklahoma was 12.4 for pneumoconioses in West Virginia.

A limitation of this map is that it depicts only 1 distinctive cause of death for each state. All of these were significantly higher than the national rate, but there were many others also significantly higher than the national rate that were not mapped. The map is also predisposed to showing rare causes of death — for 22 of the states, the total number of deaths mapped was under 100.

Using broader cause-of-death categories or requiring a higher threshold for the number of deaths would result in a different map. These limitations are characteristic of maps generally and are why these maps are best regarded as snapshots and not comprehensive statistical summaries (5).

If you want to look at other more crazy ways to die, take a look at this grusome video that lists 10 truly horrible ways to die (not for those with a weak stomach, on a first date, with their mother, or on a job interview)

They all seem like ways I don't want to die.